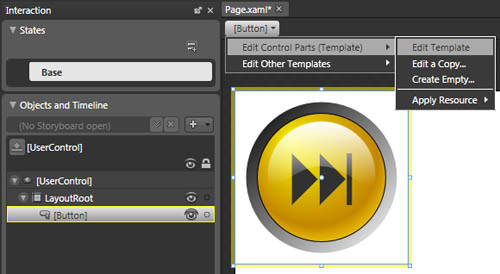 Last weekend I played around with the new version of Blend 2.5 to see how the Visual State Manager (VSM) was working. I was pleasantly surprised by the simplicity of it all. Actually it works just like an animation. You just don’t need a timeline for states. So if you know how to animate in Blend, it is fairly easy to add states to buttons. To show you, I’ve adde states to the MediaPlayer-style videobutton I made in the previous post.

First doubleclick the button in the Objects and Timeline category in the Interaction Panel. A yellow line indicates it is selected. Then from the Button in the breadcrumbsbar below the titel of the document, click the little arrow and select Edit ControlParts (Template) and Edit Template. Since we’re using a button with a self-made template we already have a template. If you start with a new button, you’ll have to create a template using the menu first. 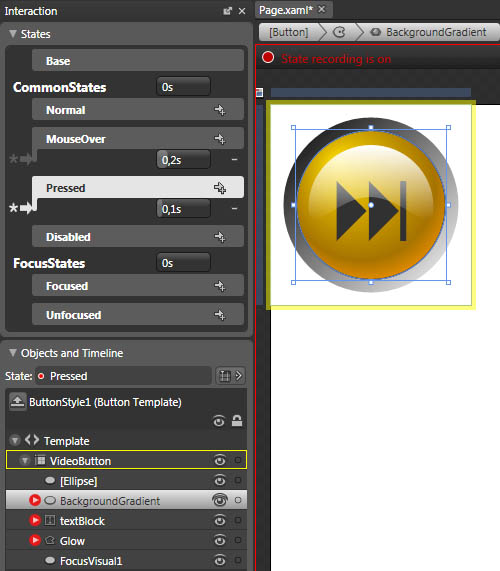 In the button Template, the States Category in the Interaction Panel will show several default states for the button. Below,  I’ve selected the pressed state. The “State Recording is on” message appears in red and just like in animating, you can now change Opacity, Color for that state. You can even use transformation, as you may notice that the glow and the TextBlock are moved down a few pixels.

The Name of the elements of the button in the Templates are preceded by a red circle with a white arrow to indicate it is particitpating in the current state. I have not discovered how to delete this using the UI, but you can easily find it in the XAML is you have to.

You can add transitions for the several states of this button using the + icons and – icons on the State bars. Change the transistion time with the (as buttons disguised) TextBoxes. You can drag to change the value like in other TextBoxes in Blend.

These are the states I created: a lighter yellow for the MouseOver, a darker yellow and transitions on the glow and text for the Pressed and a colorless version for the Disabled state. Note the the Focus state kicks in when the button is Pressen and remains Focused when released…

The XAML that the VSM generates is rather lengthy. Just as an example here’s the state which has least code (except for the Normal state that has an empty Storyboard)…